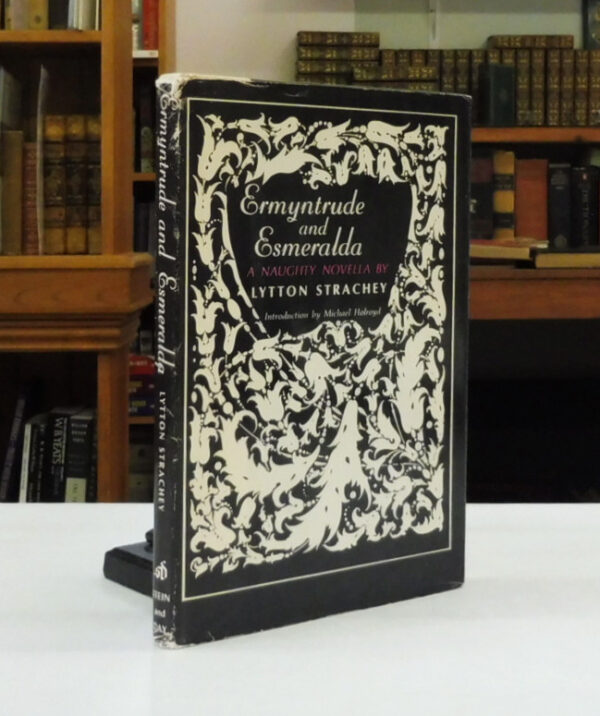 Ermyntrude and Esmeralda, a Naughty Novella, Strachey, Lytton. Published by Stein and Day, New York, 1969.  First Edition in book form; originally appeared in Playboy magazine. Introduction by Michael Holroyd. 8vo up to 9½” tall., 78pp. with full page illustrations by Erté in grayish blue, white and black. Quarter white over black boards with gilt spine titles. Contents are in fine condition without markings, tears or folds; binding is tight; light sunning to tail and head of spine. Dustjacket is clipped with small chips to spine tail and head, rubbing to edges, scratches to rear.

Giles Lytton Strachey (1880-1932) was an English writer, critic, biographer and a founding and influential member of the Bloomsbury Group.  His best-known works are ‘Eminent Victorians’, published in 1918 and ‘Queen Victoria; (1921) He lived with the painter Dora Carrington. A year later, he met and fell in love with Ralph Partridge, a distinguished veteran of the war, and Partridge married Carrington in 1921 in order to maintain the love triangle with Strachey. Their lives are portrayed in the 1995 British film ‘Carrington’, starring Emma Thompson and directed by Christopher Hampton.

Erté was a Russian artist and designer known for his glamorous opera sets, jewelry, costumes, and graphic arts and widely recognized as the most influential artist of the Art Deco movement.

Ermyntrude and Esmeralda was written as an exchange of correspondence between two teenage girls who have pledged themselves to find out all they can about sex, love, and making babies.  3917      $30