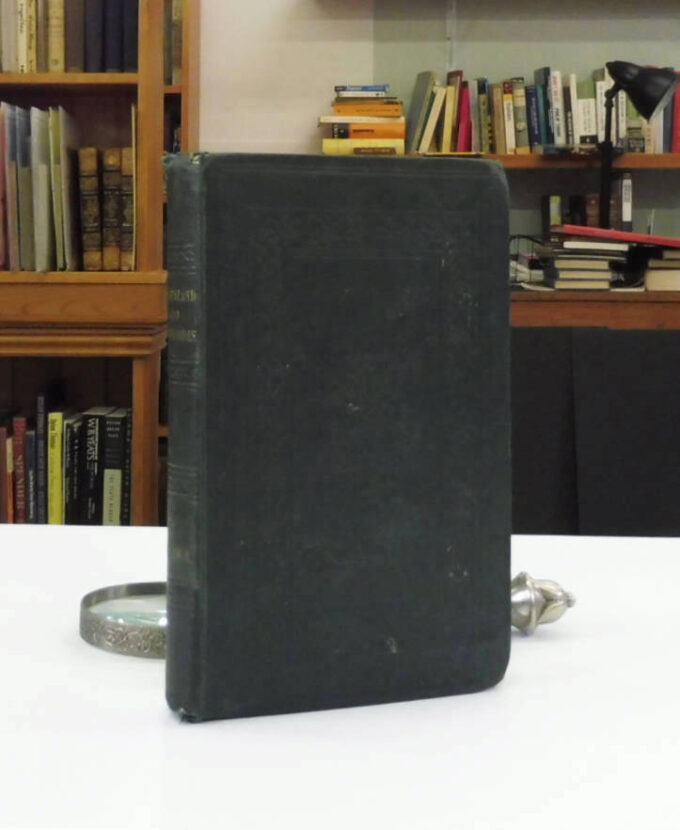 New Zealand and its Aborigines: Being an Account of the Aborigines, Trade and Resources of the Colony; and the advantages it Now Presents as a Field for Emigration and the Investment of Capital by William Brown.  Published by Smith Elder and Co. London, 1845. First Edition.  8vo – over 7″ – 9″ tall. viii, 302 pages. Dark green cloth with blocked design, gilt spine titles. Light wear to boards with rubbing to edges and fraying head and tail of spine. Front hinge is cracked between pastedown and free endpaper; one gathering has loose top stich affecting a few pages which remain attached.  Label likely removed from front pastedown with a few small pink numbers to rear pastedown. Pages wavy without any evidence of moisture damage, light foxing to title page; a few thumbmarks; otherwise contents clean without marks, tears or folds.

William Brown (1809 -1898) was a 19th-century New Zealand politician, merchant and newspaper proprietor. Born in Scotland, he moved to New Zealand in 1840.  In 1844 when his wife required medical treatment in Britain, Brown and his business partner bought a barque, the Bolina, to transport the Browns, and also to test the British market with a consignment of local exports. “When the Bolina sailed out of the Waitemata on 20 December 1844 the flag was raised at Government House to salute the enterprise of the firm responsible for the first direct export cargo to the homeland. On this journey, Brown completed New Zealand and its Aborigines extolling the prospects of the colony and the merits of the Maori people. Brown was an acute observer; his book is valued for its insights into classical Maori society”.  Reference: R. C. J. Stone. ‘Brown, William’, Dictionary of New Zealand Biography, first published in 1990.    002677/3470 $280

Be the first to review “New Zealand and its Aborigines, William Brown – First Edition 1845” Cancel reply