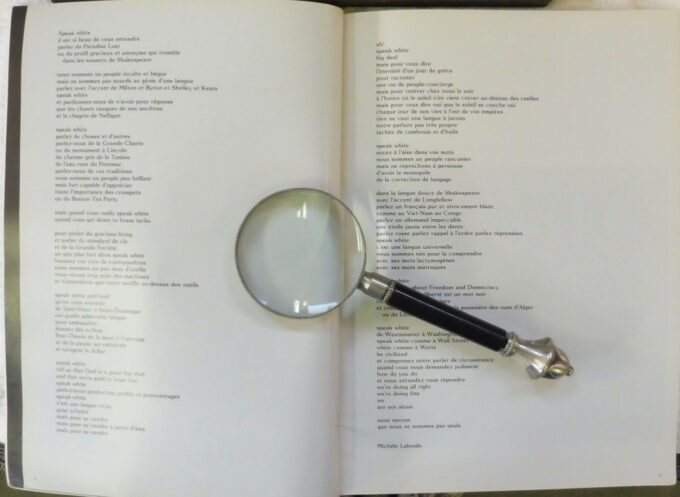 Volume 10. No 39 – Speak White, Guerin-Lajoie, Denyse and Jorge Guerra (Editors), Le Magazine OVO, Montreal, Quebec, 1980. First Edition. Illustrated glossy wraps. 4to up to 12″ tall.  46 pages plus one page of ads. Michelle Lalonde’s iconic poem Speak White printed (in French) across two pages followed by full page black and white photographs depicting the theme of oppression in all its forms and across the world. In near fine condition with light toning to outer edges, tiny bottom corner crease, light wear to covers; no markings or tears and binding is tight.

‘Speak White by Michèle Lalonde, was first recited at a 1968 show and again at the Montreal cultural event Nuit de la Poésie (Night of Poetry) in 1970 to benefit Québecois political prisoners.  The poem was published in 1974.  “The poem speaks to the Anglo-American economic exploitation embedded in the racist jeer “Speak white,” often hurled at Québécois who chose not to speak English.” (The Canadian Encyclopedia, Historic Canada). Michèle Lalonde (1937-), Quebec poet, playwright and essayist. In 1979, she received the prix Duvernay from the Société Saint-Jean-Baptiste for her work overall. In 1984, she became president of the Fédération Internationale des Écrivains de Langue Française (International Federation of French-language writers). ‘  002484   $90