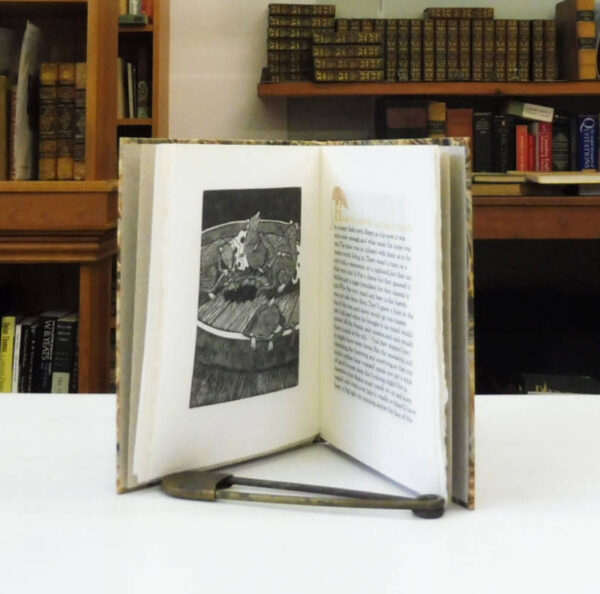 The Pied Piper of Hamlin. Chamberlain, Sarah (Printer & Illustrator). Published by The Chamberlain Press, Portland, Oregon 1980. Number 90 of 150 numbered and signed copies. 24mo up to 5½” tall. Unpaginated [22] pp.  Marbled paper-covered boards with brown leather spine with dark brown spine titles, gray endpapers, rough cut fore-edge.  The type is handset Goudy Bold and the paper is Hosho. The Pied Piper of Hamlin designed and printed the book and cut the wood engravings: 11 various size engravings, printed black on white, and several smaller engraved designs, printed in brown. This lovely collectible is in pristine condition. Two Chamberlain illustrated book releases are additionally laid in: The Three Bears and, The Beast From Belloc.

This is the classic story of the Pied Piper who pipes the village free of rats and when the villagers refuse to pay him for the service, he pipes away their children. Sarah Chamberlain studied with Barry Moser and Leonard Baskin and, from the mid-1970s to the mid-1980s, ran the Chamberlain Press. Her work has illustrated numerous texts, from Aesop and the Brothers Grimm to Charles Simic and many miniature books.

Be the first to review “The Pied Piper of Hamlin, Sarah Chamberlain – Signed, Limited Edition”