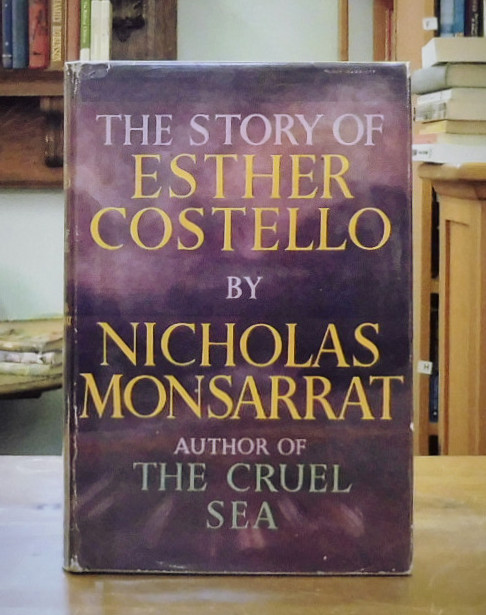 The Story of Esther Costello, Monsarrat, Nicholas. Published by Cassell and Company, London, 1953. First Edition; Canadian Edition stated on jacket. 8vo up to 9½” tall. 255 pages. Black cloth boards, gilt spine titles. Clipped jacket protected in mylar has some rubbing to edges; volume in fine condition without marks, tears or folds.   Monsarrat’s second novel is a sinister story about the financial exploitation and abuse of Costello a young girl with disabilities. It was adapted to film in 1957 which starred Joan Crawford, Rossano Brazzi, and Heather Sears. Heather Sears was awarded a BAFTA as Best British Actress for her performance in the role of Esther.   002511   $35

Nicholas Monsarrat (1910-1979), was a British Novelist.  A pacifist, Monsarrat served in World War II, first as a member of an ambulance brigade and then as a member of the Royal Naval Volunteer Reserve (RNVR). Monsarrat ended the war as commander of a frigate and drew on his wartime experience in his postwar sea stories. He served in Canada as a British information officer from 1953 to 1956, and intermittently after that date. He wrote science fiction, historical fiction, spy thrillers and war novels. He is perhaps best known for his sea stories including The Master Mariner, an epic tale of the sea and seafaring from the sixteenth century to near the end of the twentieth.

Be the first to review “The Story of Esther Costello, Nicholas Monsarrat First Edition” Cancel reply