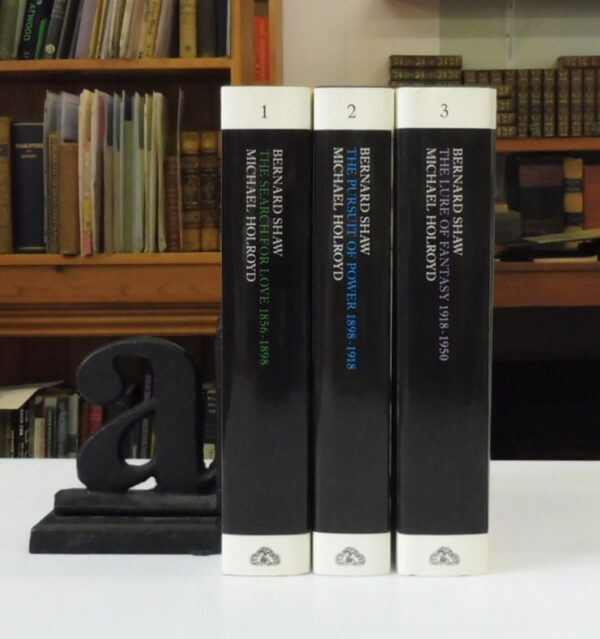 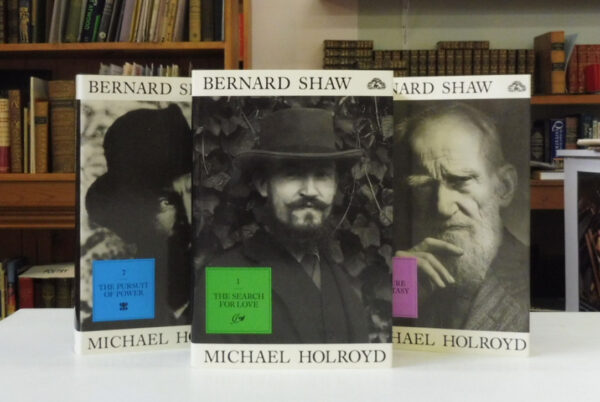 Biography and Memoir, Historical and Political, Literary Bio and Memoir

Bernard Shaw, Three Volumes, Holroyd, Michael. Published by Chatto and Windus, London. Vols. 1-3; 1988, 1989 and 1991 respectively. First Editions. Volume 1 – 1856-1898, The Search For Love; Volume 2 -1898-1918, The Pursuit Of Power; Volume 3- 1918-1950, The Lure Of Fantasy. 8vo up to 9½” tall. viii+486pp, x+422pp, x+545pp with black and white plates and indexes. Black cloth with gilt facsimile Shaw signature front, spine titles in gilt on green, blue and purple labels, decorated endpapers. Each volume is in fine condition without markings, folds or tears; each jacket is unclipped and in like fine condition. A very collectible set of the highly acclaimed Holroyd biography of George Bernard Shaw (1856-1950). An Irish playwright, critic, polemicist and political activist, Shaw’s influence on Western theatre, culture and politics extended from the 1880s to his death and beyond. He wrote more than 60 plays during his lifetime and was awarded the Nobel Prize in Literature in 1925.