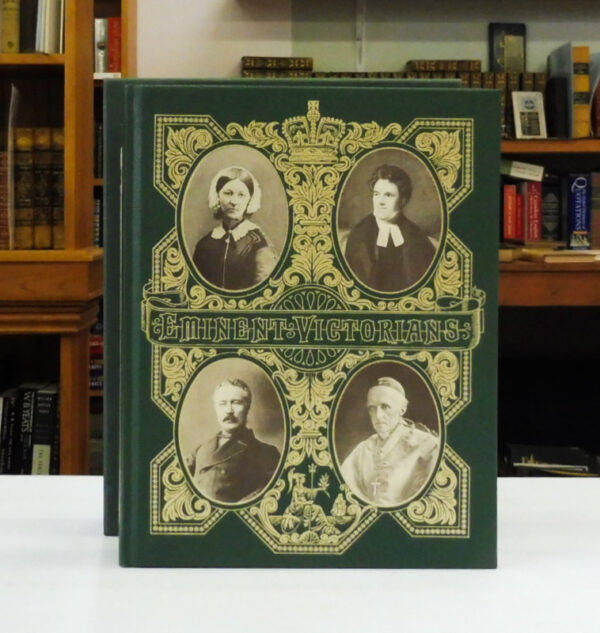 Eminent Victorians. Strachey, Lytton Published by The Folio Society, London, 2000. Follows the text of the first edition published by Chatto & Windus in 1918. 4to up to 12″ tall. 272pp. with 12 pages of illustrations in colour and black and white. Green cloth boards with four photographic portraits within elaborate gilt scrolled borders; green endpapers. Housed in a green paper covered slipcase. Volume is in fine, unread condition; slipcase is structurally fine with the lightest of shelf scuffing.

Lytton Strachey famous and irreverent biographies of Cardinal Manning, Florence Nightingale, Dr Arnold and General Gordon. The book conveyed the sense of a necessary rupture with the past by exposing the generational hypocrisies that Strachey felt had led to WWI.

Giles Lytton Strachey (1880-1932) was an English writer, critic, biographer and a founding and influential member of the Bloomsbury Group.  His best-known works are ‘Eminent Victorians’, published in 1918 and ‘Queen Victoria; (1921) He lived with the painter Dora Carrington. A year later, he met and fell in love with Ralph Partridge, a distinguished veteran of the war, and Partridge married Carrington in 1921 in order to maintain the love triangle with Strachey. Their lives are portrayed in the 1995 British film ‘Carrington’, starring Emma Thompson and directed by Christopher Hampton.  003918  $30