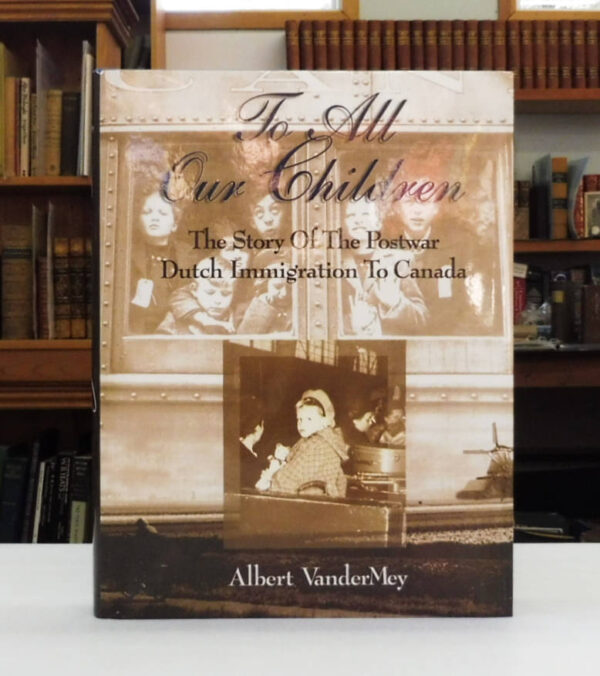 To All Our Children: The Story of The Postwar Dutch Immigration to Canada, Albert VanderMey

To All Our Children: The Story of The Postwar Dutch Immigration to Canada, Albert VanderMey. Published by Paideia Press, Jordan Station, Ontario, 2004. Second Printing. 4to up to 12″ tall; 511pp., illustrated with black and white photographs. Royal blue boards with gilt spine titles. In mint, unread condition in fine, unclipped jacket.

“In the fifteen years following the end of World War II, thousands of Dutch people waved goodbye to their families, friends, past lives and possessions, boarded a ship, and made the long voyage to Halifax, Quebec City, or Montreal, where they disembarked as landed immigrants to Canada. Most of them had little or no idea of where they were going or what they would find when they got there. Still, they came. Between 1946 and 1982 more than 180,000 people emigrated from The Netherlands to Canada. That enormous tide peaked in 1952, when almost 21,000 Netherlanders made Canada their home. The movement arose out of a long-occupied country whose citizens considered Canadians their liberators, out of tiny Holland’s limited capacity for growth, and out of the uneasy political situation in Europe. The real result of the movement, the lives of the ordinary people who uprooted themselves to immigrate, is the subject of this overwhelming documentation.”