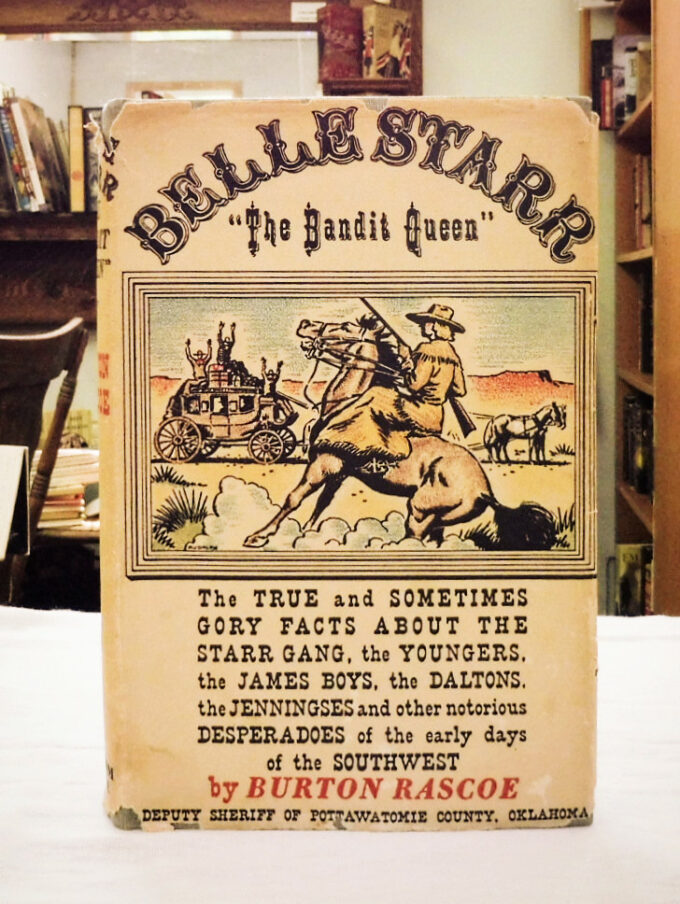 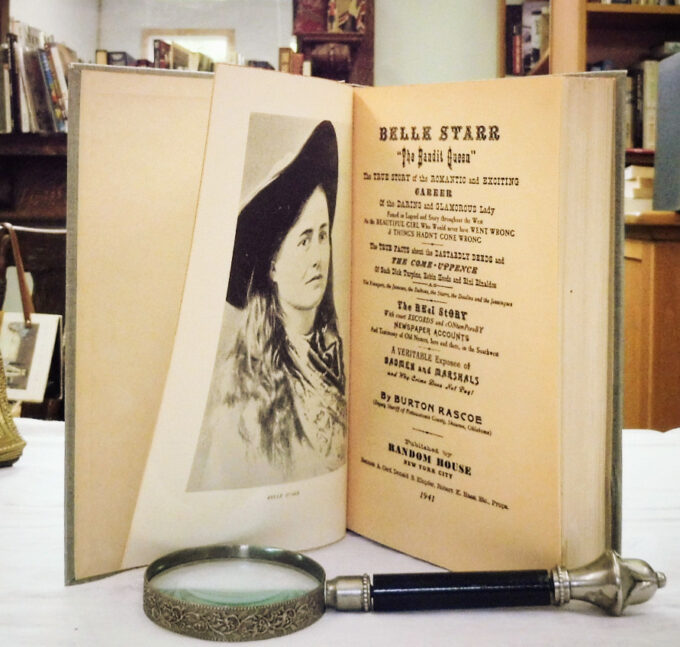 Belle Starr “The Bandit Queen”, The True Story of the Romantic and Exciting Career of the Daring and Glamorous Lady Famed in Legend and Story Throughout the West, Rascoe, Burton, Deputy Sheriff of Pottawatomie county, Oklahoma. Published by Random House, New York, 1941. First Edition/Stated First printing. 340 pages including a chronology and necrology from 1837 to 1924, a glossary of Western terminology, an extensive annotated bibliography plus index. Frontispiece of Belle Starr and 12 additional black and white illustrations and photographs. Gray cloth boards with red titles front and gilt titles blocked in red to spine, top edge stained red. Light soiling to endpapers and outside edges; text block fine without markings, tears, folds and pages remain bright. Light spine lean; binding and boards otherwise fine. Unclipped jacket has chips and tears and back flap is partially separated at hinge line.

Myra Maybelle Shirley Reed Starr (1848 – 1889), was a notorious American outlaw a “Female Jesse James” who associated with the James–Younger Gang among other outlaws. She was convicted of horse theft in 1883 and fatally shot in 1889 in a case that is still officially unsolved. Author Burton Rascoe was a highly regarded journalist, editor, critic and author of several non-fiction books.  By the age of 30, Rascoe was literary editor of the New York Tribune and was regarded in the Yale Review as one of the three most important literary critics in America between 1892-1957. Rascoe was also a deputy sheriff of Pottawatomie County, near Shawnee, Oklahoma, which gave additional authority to his very popular book on Belle Starr. The 1941 Fox movie “Belle Starr” starring Randolph Scott, and Gene Tierney was based on his book.   002671            $90