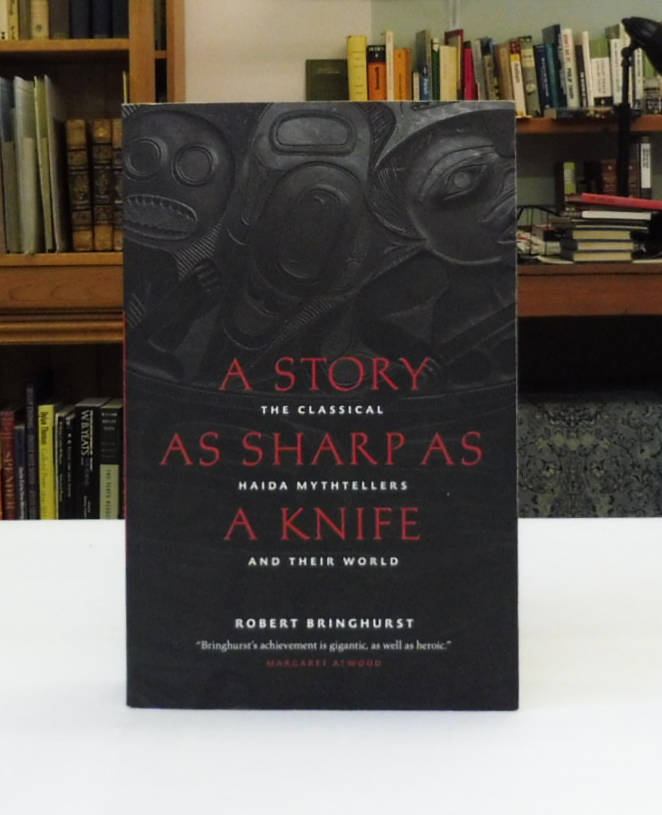 A Story As Sharp As a Knife: The Classical Haida Myth tellers and Their World, Robert Bringhurst

A Story As Sharp As a Knife: The Classical Haida Myth tellers and Their World, Bringhurst, Robert. Published by Douglas & McIntyre Ltd, 2011. 2nd edition. 541 pages including photos, bibliography and index. Card covers.  Contents are pristine with very light shelf wear to card covers and a small mark to outside tail edge (not a remainder mark).

The Haida world is misty archipelago a hundred stormy miles off the coasts of British Columbia and Alaska. For a thousand years and more before the Europeans came, a great culture flourished in these islands. The masterworks of classical Haida sculpture, now enshrined in many of the world’s great museums, range from exquisite tiny amulets to magnificent huge house poles. Classical Haida literature is every bit as various and fine. It extends from tiny jewels crafted by master song makers to elaborate mythic cycles lasting many hours. The linguist and ethnographer John Swanton took dictation from the last great Haida-speaking storytellers, poets and historians from the fall of 1900 through the summer of 1901. His Haida hosts and colleagues had been raised in a wholly oral world where the mythic and the personal interpenetrate completely. They joined forces with their visitor, consciously creating a great treasury of Haida oral literature in written form. Poet and linguist Robert Bringhurst has worked for many years with these century-old manuscripts and brings these works to life in the English language. 001929      $18